I got an invitation to a bloggers brunch organised by Julia Gabriel Centre at Seb’s Bristo and having enjoyed the previous Daddy Bloggers get together, I look forward to sharing ideas and thoughts on “Raising the iPad Generation”. 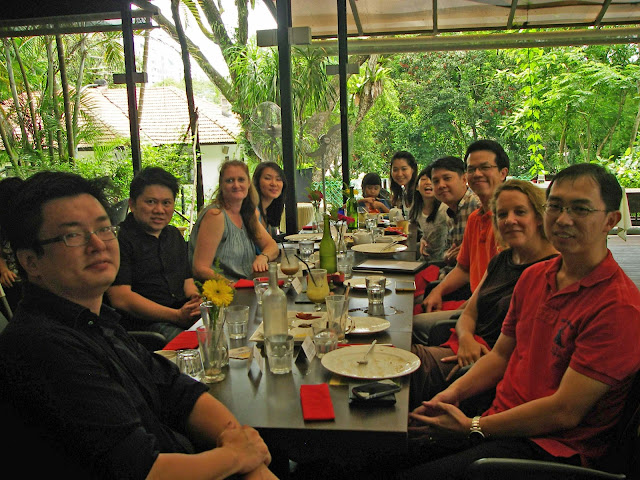 The mummy bloggers couldn’t turn up due to personal reasons and it was another daddy blogger session, unintentionally. The other bloggers present were Winston (Dear Xander & The Blogfather), Andy (Sengkang babies), Nick (nickpan) and Daddy M (Wacky Duo).

Before the gathering, I have personally banned Xavier from using both the iPad and iPhone. He is always asking to play the game Angry Bird. I have seen too many instances where parents use them as a tool to keep the kid occupied so they can do their own things. Or worse, the kid being so engrossed in the little screen during meal time and the poor parent have to feed the kid (instead of the kid eating on his own). While I know its inevitable that Xavier would use it eventually but I wanted to delay it till I figure out how to impose restrictions effectively.

During the gathering, I think all of us see iPad as a useful tool. It’s interactive and it can be both educational and entertaining if correctly used. It is definitely better than television which is more like a passive tool. Daddy M’s kid actually picked up ABC from iPad.

All the other bloggers actually allow and even encourage their children to use and explore the iPad. So how do some of them make use the iPad/iPhone were used correctly?

Should parents try to stay above of your kid in terms of the technology know-how? Not needed. Given their eventual exposure to technology, they will probably ahead of us.

Youtube seems to be a concern. Unlike websites which you can resist access, its not easy to restrict what videos they can stump onto when they are in youtube.

Nick shared with us a game app called Fashion Story which his elder daughter is currently playing. He and his wife actually uses it to instill entrepreneur ideas like the need to get stocks, taking note of factors that could affect business like the number of mirrors in store, the number of cashiers, etc. His wife is also thinking of bringing their daughter to Bangkok to do actual merchandiser shopping. Very interesting.

The gathering gave me interesting insights and has opened my mind to encourage Xavier to use the iPad under supervision. Let’s see how it goes.