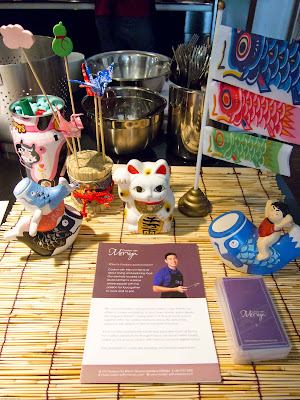 Cookyn with Mervyn organised a “Our Tribute to Japan” session today to raise funds for the unfortunate events that have happened in Japan. Mervyn and his team shares their Japan experiences as well as cooking skills and all proceeds from the session will be donated to Red Cross.

I had thoughts of donating to Red Cross myself for Japan disasters and when Cookyn with Mervyn decided to hold this session, I signed up myself and Lilian without hesitation. This session prove many firsts for me: first time attending a cooking class, first time doing real food preparation work (like cutting fish, peeling potatoes, making my own seasoning, etc) and first time seeing such “power” kitchen appliances (more on that). 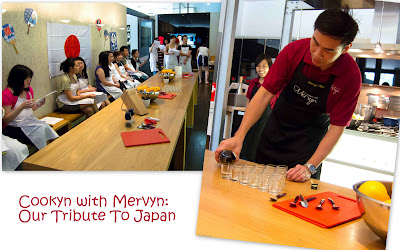 We prepared four dishes in the session; our starter was “Hamachi Salad with Calamansi Dressing”, with two main courses, “Cold Soba with Smoked Duck” and “Oven-Roasted Potatoes with Mentaiko Mayo and Seaweed Powder”, and “Orange and Sochu Jelly with Whipped Cream” for dessert. Kitchen Culture sponsored their kitchen space and boy was the kitchen huge and beautiful. Huge island table top with mixture of induction and gas hobs set in marbles and with an equally impressive wet area at the back, littered with cool kitchen appliances and flanked by two rows of oven and a super cool fridge. Mervyn starts off by proposing a toast with Sochu courtesy of the ingredient sponsor Greengrocer.com.sg. 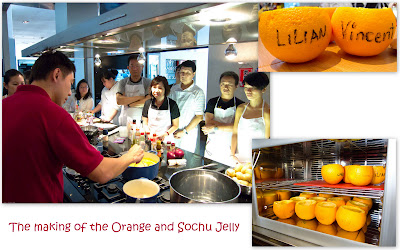 Then it’s off to work. First up, our dessert as it takes the longest time to “set”. We needed to dig out the orange flesh and mix it with gelatin powder to form the jelly then pour the mixture back into the intact orange “shell” before chilling it to form the jelly. It normally takes 4-5 hours for the jelly to to be firm but Kitchen Culture have this machine which can quicken the process by “blast chill” (sounds uber).

Next up, potatoes. We split the job with some of the class peeling the potatoes and some cutting them into wedges. Then we season them with canola oil, garlic powder, salt and pepper and its off to the high-tech ovens. The traditional way is to blanch in salted boiling water followed by airing them to dry and thereafter putting them into the oven. These ovens however, will steam the wedges followed by oven-roasting them to perfection, all by the touch of a few buttons. And they also come with high-tech price of slightly above $10,000.

While the ovens does their job, Mervyn demonstrated with how to do the dressing for the salad and prepared the sauce for the cold soba. While he was on the topic on how to Flambé (French for flaming or flamed) the sauce to burn off the excess alcohol, he shares what not to do.

Once the sauce is done, we were left with the easy job of twilling the soba into the plastic shot glass, placing slices of smoked duck to the side and adding the sauce, topped with sesame seeds and chives. 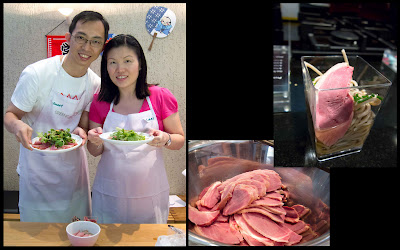 Mervyn went on to prepare his version of the salad, explaining how we should try to slice the fish as thin as possible. On the left is Mervyn’s version of the Hamachi Salad with Calamansi Dressing. Nice thin slices of the yellowtail kingfish and blue fin tuna drizzled with the calamansi dressing. And on the right is my interpretation of the dish. Thick sashimi slices soaked with sauce. Can see that I’m either very hungry or not playing attention to the words “thin slices” and “drizzle”. 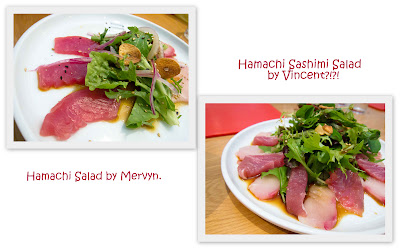 As we are enjoying the first two dishes, the golden wedges were taken out from the oven and ready to be served for the next dish. So crispy on the outside yet soft and puffy on the inside, it is paired with the yummy sauce made with mentaiko and Japanese mayo. This dish is just so irresistible that almost all of us went for second helping. 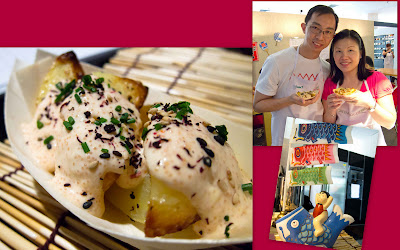 Finally, the desserts are all chilled and set. Top it with a dash of whipped cream and orange peel strips and it’s ready to be served. 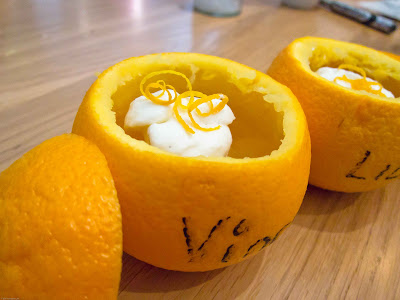 We sat down and while enjoying our dessert, we shared our experiences in Japan, what we liked and admired about them and what Japanese food or restaurants we love. It was an enjoyable and light-hearted session and with the $3,000 raised, we hope to help Japan in our little way. Gambatte Japan!