If you are wondering how come I haven’t been active online recently, well the past week has been one of the worst week for my family.

It all started with Xavier’s cough last Friday, then Lilian’s got 1 Stye and 2 Chalazion all on her right eye on Friday as well. She needed to go for operation Friday evening and was on MC Friday to Tuesday. Then Xavier’s cough worsen and Tuesday/Wednesday was the worse. He was coughing the whole night that neither himself, Lilian or myself got any sleep at all. Add that to his stroller losing one of the wheels without us knowing and our sudden urgency to look for a new infant care added to the week of “interesting” events.

The problem with baby coughing is they dun know how to get the phlegm out. So its heart-breaking hearing him trying to breath through his stuffy nose and hearing the phlegm going up and down his airway. And when he cough, he was trying so hard that it sounded like he was coughing his whole lungs out (like those coughing and choking at the same time).

We took him to see Dr. Anthony again on Thursday. He said he expected the cough to be worse but the medication seems to have control it well. But given Xavier has developed Bronchitis already, he tapped his table with his fingers for a moment (as if in deep thoughts) before saying he is gonna change the method now. Xavier will be on Nebuliser every 6 hours and had to go to Mt Alvernia for Chest Physiotherapy. This would be the most effective way to clear his phlegm.

Receiving all these instructions at 10pm at night was daunting for first-time parents. Add that to Xavier crying till he totally lost his voice (his worst crying I heard so far) when the nurse demonstrated how to use the Nebuliser, I couldn’t help feeling lousy again (since Xavier likely to have got the cough from me). Lilian and I were at a lost for a moment as either of us had to take leave to bring him to Mt Alvernia on Friday to do the chest physio and Xavier would not be able to go to his Infant Care Centre up to Tuesday when we go back to Dr. Anthony for a review. After weighting our options, we manage to work out a plan and I thank my colleagues for their understanding (with the urgent leave matter).

The chest physio was very effective, though not the most pleasant for Xavier. The therapist taught us how to “percussion” (clapping Xavier’s chest to “loosen” the phlegm in the lungs and the airway) especially after Nebuliser session. She then proceed to suck out the phlegm in the nose and throat area. This is by far the most effective way to remove the phlegm for babies. The coughing reflex from the baby to “bring” the phlegm up from the airway to the throat area so that it could be sucked out. This is where my heart aches again seeing Xavier coughed till his whole face turn purple. But seeing the phlegm being sucked out of the tube, I knew he would feel better after that.

As for why I titled this post Darth Xavier? Well he looked (and the machine sounded) like Darth Vader. I’m just looking at the lighter side of things. But its not always so relaxing, most of the time he would be crying as he hates not being able to put things in his mouth. Joking again. He just cry because he hates that thing. 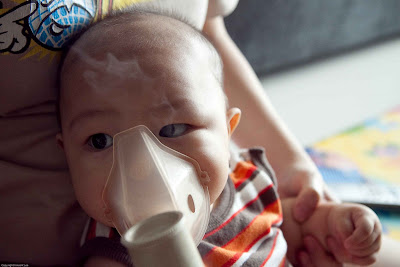 Its Sunday now and so far his condition has improved. He is getting better sleep, his milk intake is slowly going back to before he fell sick and he is happier. However he still has the phlegm sound when he breaths. And he threw up twice today on our bed (and we are running out of bedsheets to change). But its a happy problem since its the sticky phlegm he is throwing up.

But its been a tiring week and the lack of rest/sleep and with Xavier coughing constantly, Lilian seems to have now caught the cough from Xavier. Let’s hope Xavier recovers soon. Nothing warms my heart now than to see his smile and hear his hearty chuckle.