Lilian had gathering with her friends and she was gonna bring Lucas along. So I thought I’ll have some bonding time with Xavier. And what would be more fun for boys than looking at and talking about BIG things. How BIG? DINO BIG!

I been looking for an opportunity to check out the Dinosaur Live! exhibition at Science Centre Singapore and this seem to be a perfect opportunity since only Xavier and I would be going and it would probably take max about 1 1/2 hour before we pick up Lilian and Lucas.

I got Xavier all excited too. He had this DVD about Dinosaurs as a Christmas present last year and he enjoyed that cartoons introducing the different dinosaurs. And he was repeating to Lilian the whole trip that he is gonna see Dinosaurs and boasting that he is “not scared”.

But the moment he step into the Annex at Science Centre Singapore, he froze and his jaw dropped for 5 seconds. Standing right in front of him was this huge skeleton of a T-Rex, with jaws open and as if looking down at him. 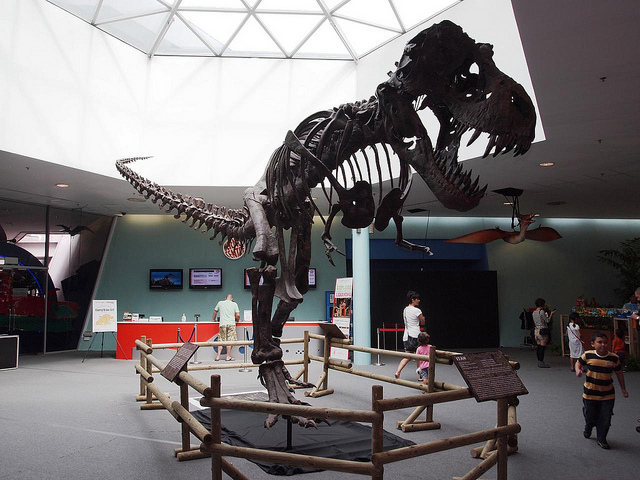 The next moment Xavier was clinging on to me like a koala bear, whining and crying that he wanna go home. No amount of coaxing and pacifying could make him change his mind. I didn’t even get the chance to take a photo of the T-Rex skeleton as he was clinging to me really tightly. The only consolation was that I have not bought the tickets yet. In the end, we adjourned to MacDonald at West Coast Park for McHappy meal which we didn’t get a toy for as it has run out, #$%!*, and outdoor playground fun.

I didn’t manage to take a single shot of the exhibits. But I did find the above photo of the T-Rex Skeleton on Flickr taken by coolinsights (Walter Lim). You can see more see more Dinosaur Live! photos from him here.

2 thoughts on “Dinosaur Live! NOT!”