I love the Initial D anime series from the very first time I watched it. I even bought an Autoart Initial D AE86 diecast model as I dream of going to Japan to learn how to drift and soaking in the adrenaline rush of drifting around mountain roads.

That will remain a dream (till maybe when I strike Toto). But a step forward would be to take an advance driving course. I been looking for one since I got my own car but it was either unsuitable timing (on my part) or cost. Hence when Chris from FootWorks Media sent an email about organising a defensive driving course for a small group of 20, I immediately forward to several friends to see who is keen. Johnson responded and boy did we have fun last Sunday. 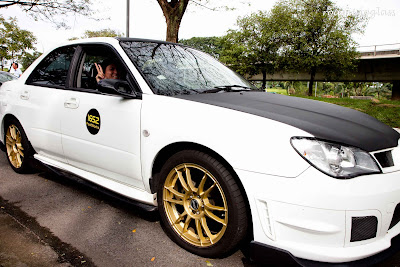 The venue is set at Singapore Turf Club coach bay as most of the Kallang carparks are already closed and the only one left is not suitable. Arrived to a small breakfast spread of curry puff, siew mai and soon kuan. Plesantly surprised as I was expecting packed economical beehoon kind of breakfast. 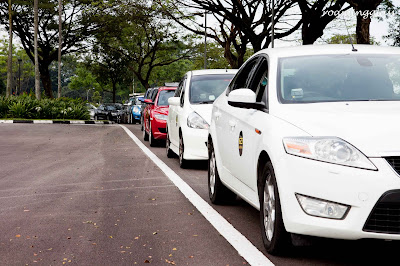 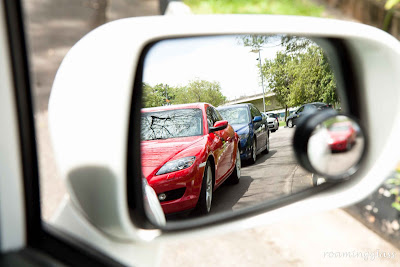 About 18 of us turn up and the car lineup range from compact hatchbacks like Kia Picanto to SUVs like Subaru Forester to roadsters like Mazda MX5 and Honda S2000 to coupes like BMW 325i Coupe and Mazda RX8. There were three lady drivers and three young drivers (age 20 and below). Pretty good mix. 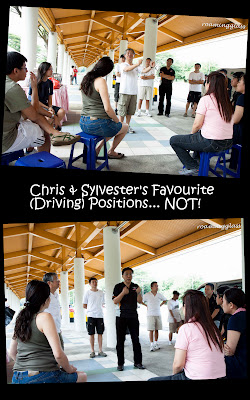 After a short briefing by Chief Instructor Sylvester, off the first car went to try out the Slalom. As the area was pretty small, only one car could do the drill at anytime. So there was a fair bit of waiting. But that provided time to mingle around too. Shalom looks easy but its not when trying to do at faster speed. The idea is to do the left and right turns in a smooth movements (as opposed to sudden sharp turning) and to keep your car to the cones as close as possible. 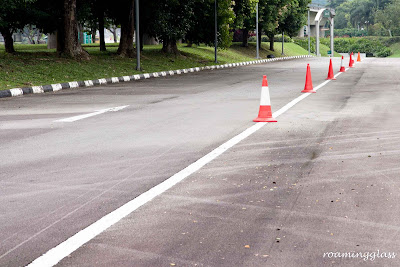 Next up, Handbrake Turn. This is fairly difficult to execute, especially for the AWD and RWD cars. But once you get the hang of it, its heaps fun. I was able to execute it pretty well on my Honda Jazz after some practise. The trick for my car is to turn the steering wheel in one swift motion and yank the handbrake as hard as possible. For once, drum brakes seems more fun than dics brakes (its easier on drum brakes as the contact area is larger compared to dics brakes). 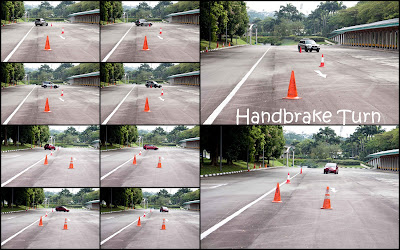 Next was E-Brake followed by Brake and Swerve. As most modern cars are equipped with ABS, this exercise allow participates to get a feel of ABS at work. I tried the E-Brake on my own before and I know how it feels. I must admit the first time I feel it kick in, I thought my car was going to fail apart. Chris mentioned that many a times when people apply E-Brake during a real emergency, the ABS kicks in and they let go of the brake thinking something is wrong with the car (and the consequences are bad). I feel this exercise is crucial. 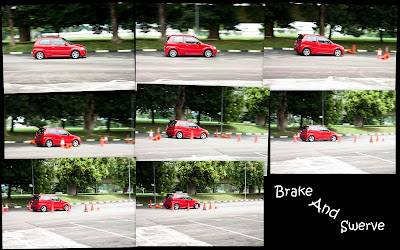 J-Turn was next and Sylvester says this exercise is 包吃, as its so easy everyone can do it. Just turn the steering wheel in one swift motion, no brakes needed. If you are good, you can change gear (from R to 1 or D) while your car is turning and speed off when you car is facing straight. This is heaps fun. 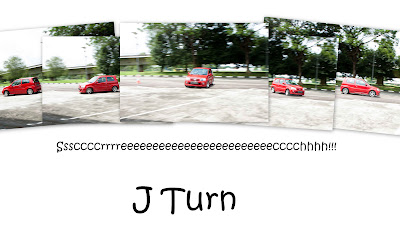 The day ends with a little friendly competition to complete a mini course in the shortest time. The course consist of the Slalom, Handbrake Turn, then Slalom again before stopping at the designated area. Sylvester shows us a demo of how its done.

When you put a few simple stuff together, things begin to complicate. As I wasn’t prepared mentally, I found my hands in the wrong position after the last Slalom cone. So my Handbrake Turn looked more like a U-Turn. This is how a noob like me do it.

Overall I find the course heaps fun, doing things you normally do not do on everyday driving yet at the same time, knowing more about your car and its own limitations. Now to find a suitable area to practise it, safely.