You may recall in my earlier post about Need for Speed: Hot Pursuit (NFS: HP), I briefly mentioned about the driving simulation game, Gran Turismo 5 (GT5), and how people would buy PS3 and steering wheel just for that game? I did that too! Well, for 1 day.

I can only (barely) afford to play one game at a time and when many of the NFS: HP players switched to GT5, I went along with the flow. GT5 is a driving simulation game where it tries to simulate driving in the real world. They have an A-Spec part where you play the driver and win races for credits and cars. Then there is the B-Spec where you play the manager of a racing team, supply the cars and hire drivers to win races for you. There are also other aspects of the game like Online (where you racing with your friends), clearing Licenses (for cars and bragging rights), Seasonal Events, Special Events, Arcade mode, etc. Its one of those games that will probably have a long lifespan and its a very involved game.

So involved that I followed what my geeky heart told me and ordered the Logitech G27 Steering Wheel and Apiga AP2 Wheel Stand. I convinced myself that the G27 wheel would allow me to have fun playing with the Clutch and H-Shifter driving all those dream cars in Manual (as my current ride in real life is Auto). And the foldable feature of the AP2 would make storing ideal as it would not take up alot of space. So when all the stuff arrived on Saturday, I happily spent the night setting it up. 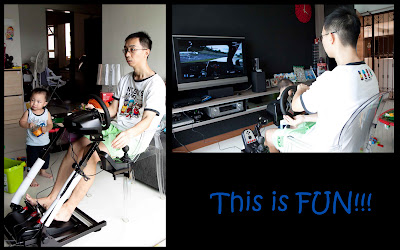 However, once I played two races, the “practical” side of me begin to feel the “After-Purchase Guilt”. And it was so strong that I sold off the whole set the next day. My reason for selling were as follows:

1. The high price tag (SGD750) for the wheel and stand doesn’t quite justify the small amount of time I have to play the game. Plus I would probably not have time for games at all after July.

2. Its rather tedious to set up the stand and wheel (need to move aside the mat, plug in power and usb, position the chair and stand), play about 1 hour then collapse the stand to keep. It’s very heavy.

3. Storing it without collapsing is bulky and since I did not get wheels for the stand, its heavy to move it around for storage.

So off it went to another happy gamer at Bukit Panjang. But not before some photo opportunity for Xavier, the baby racer! 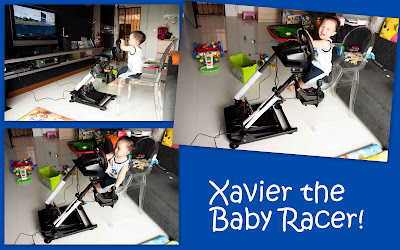 I would consider this setup if I have a dedicated entertainment room and the “cockpit” and wheel can be in a permanent position, all ready to play whenever I have the time. Till then, I will make do with the convenience wireless controller of PS3.