Hand, Foot & Mouth Disease (HFMD) is back with a vengeance. Having claimed 4 infant victims at Lucas’s infant care center on 14th February, it has since risen to 11 infants today, including Lucas. 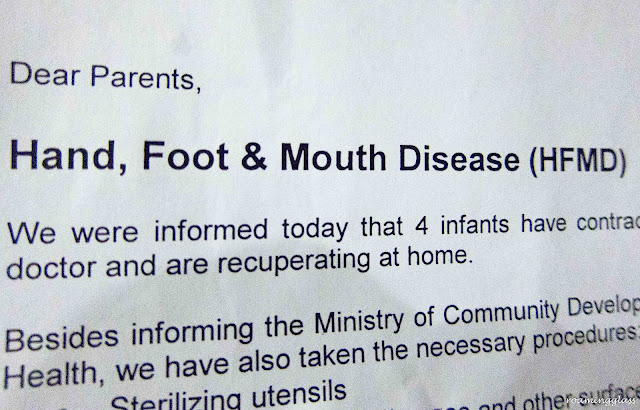 Lucas’s fever started on Friday night and we took him to the PD on Saturday since Xavier was having his review. Although he didn’t have any of the scary red spots like when Xavier had HFMD, the PD found three throat ulcers.

We were then told that there have been an increasing number of HFMD cases already and this time round, its seems to be of a different strain (from that of Xavier’s). This strain do not cause much spots and rashes so its much harder to detect.

Lucas seems to be doing fine. His fever only lasted 1 day and he had some appetite loss and was crankier than usual. But at least he didn’t get the scary rashes and spots. Its challenging period now as Xavier can’t go to school as well and we have to keep Xavier away from Lucas. We will take it a day at a time. As Lilian say, “船到桥头自然直”.