Skip to content
During my parents’ times, things were much simpler. Husbands would work to provide food on the table and wives would stop work to look after newborns, or their parents would help, or just look for a nanny to take care. Now, its different. Dual income is not an option but a must (in most families) and looking after grandchildren is no longer the grandparents’ choice of retirement activity.

For us, we choose to put Xavier in an infant care as it was the most sensible option. Lilian’s parents hands are full with my two nieces and my parents are still working. I heard too many maid horror story to entrust Xavier to a maid. Moreover I would only consider a maid to help my Mum with the housework only if my Mum could take care of Xavier. We have not got contact of any good nanny near our place. Hence infant care was the option left.

Not all infant care centers are the same. We first put Xavier in one of the neighborhood infant centers as its near our place and the closing time was 9pm. And the fee was reasonable at $550 after subsidy. I had the initial idea that babies would only eat, sleep, poo and nothing else during the first 6 months right? How wrong I was. Lilian would usually put him in the center when she goes to work and I would peep at him when I go to work (usually 30-45 mins after Lilian leave the house). He would be lying on the bouncer, bored. So bored that a few times he could either play with his own hands or cry for attention (to no avail). 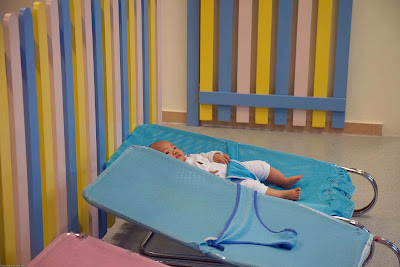 And when we go to pick him up at night, he is still on the same bouncer in the same position as he was in the morning. After one month, both of us could not take it anymore and decided to switch him to an infant care near our workplace where he would have more activities.
We were glad we did. Xavier was much happier in the new center as there were more activities like singing and story telling to them. Although the fee now is double compared to the neighborhood center, we felt its worth every cent. Below is him showing the “Elephant” they taught him recently, and him dancing out of the blue.
Also, there are peer pressures in a center with many kids fighting to get the teachers’ attention. In fact, I believe its one of the reason he started walking earlier than other babies his age (at 12 months). Given that their brain adsorb like a sponge, we felt this was for his best. But infant care is not without their disadvantages.
The main downside is your kid will keep falling sick in the first 6-12 months when he goes to the center. The reason is simple, if one kid is sick, it spreads to others (since they play together). Only when they get the right immunities build up after falling sick do they get stronger. Xavier have been visiting the PD for cough and running nose so many times that the clinic gave him a nickname “cool man” as he never smiles when he was there.
Plus you usually get 1 teacher to 3 babies in good centers (MCYS requirement is 1 teacher to 5 babies). So there would be instance where attention is not given to your baby. I have posted before where Xavier was bitten by an older boy. Well he has since bitten a girl on her face and scratched a boy on his face, though all in the name of play. So incidents so happen.
Anyway if you do decide to put your kid in a center, the most important factor is hygiene and cleanliness. Go have a feel of the school during class time and see how the kids behave and response to the teachers and the activities. Also make sure you are able to pick up your kid comfortably before the closing time of the center. If you had to rush every day just to make it in time, its not gonna work out in the long run.

6 thoughts on “Infant care centers for your kid?”