I got an invitation to a Kids Workshop at the Army Museum recently. I was surprised as I have not heard from the army since my MR parade in 2011, now they want to “mobilise” my son already? But I’m glad I brought Xavier to the workshop, he had so much fun.

The workshop is actually organised to reach out to children, to let them know what SAF is about and the meaning behind protecting Singapore. I have tried to give Xavier an insight about serving National Service before this but I think I ended up confusing him. This might be a better option, I thought.

Being my first time to the Army Museum, I almost got lost as I didn’t know it was right beside Singapore Discovery Center and both shares the same carpark. The Army, Navy and Air Force have already set up their exhibits at the different areas of the Museum. Xavier immediately warm up to familiar faces like Andy’s kids. 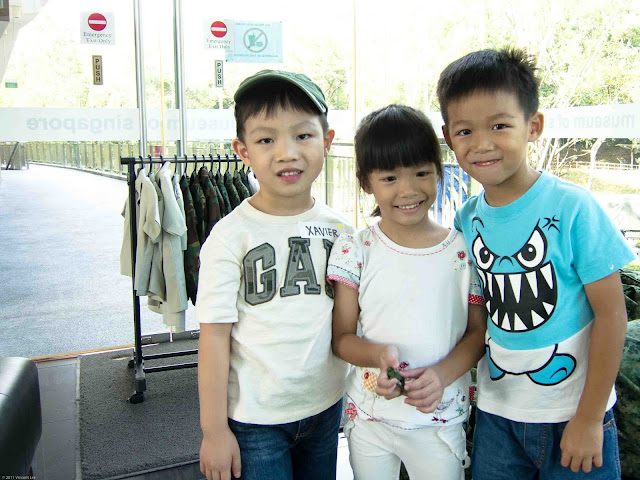 Andy had earlier “jio” me to come in my No.4 too. But I have “camouflaged” my army stuff so well that even I myself couldn’t find it the night before. 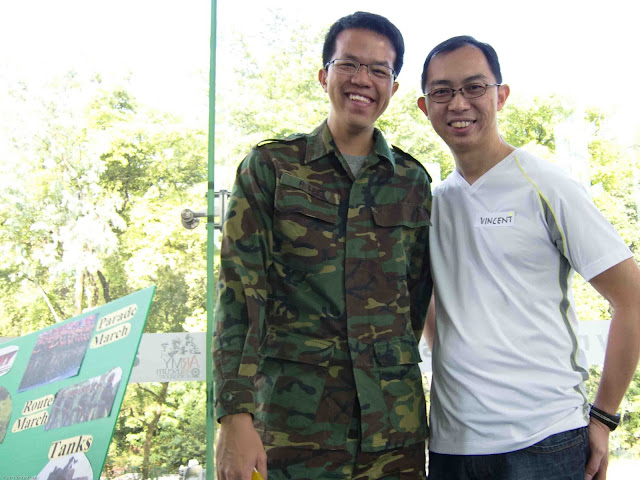 We mingled around, shake hands with the other parent bloggers, spoke to the people organising behind the workshop. The program started with COL Seet addressing the kids about who they are and why they have to defend and protect Singapore. For those guys who have been through army, you might imagine a stern officer talking authoritatively, army style. 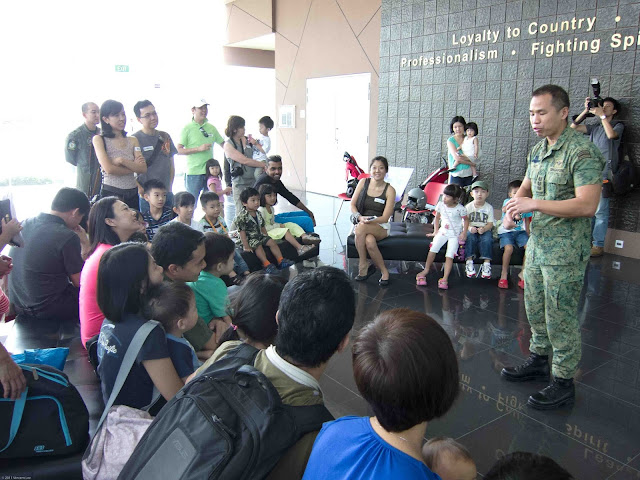 Actually it was quite the opposite. He engaged the kids in a informal way, joking with kids, asking them questions like a gentle father. And that set the tone and manner of how the whole workshop was done. All the SAF personals at the workshop were excellent in engaging children, super patient and kids friendly. Its a side of SAF I could never imagine, seriously.

The whole group was split into three, each going to the Air Force, Army and Navy “booth” to learn more about what they do and to do some crafting. Our first stop, Air Force. 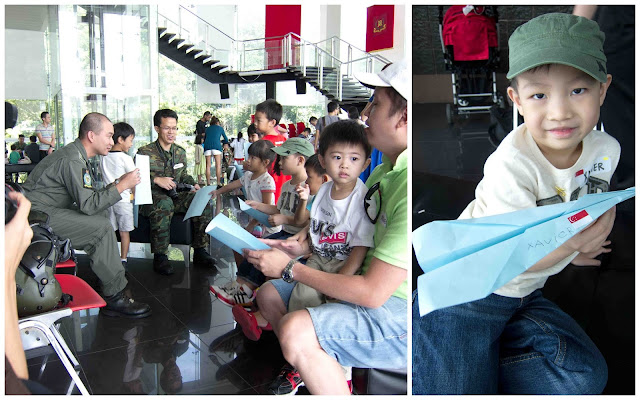 Manning the “booth” single-handedly is MAJ Kenny, an F-15 pilot. And the first task for the kids was to build a paper plane, complete with their name on it. The kids had so much fun throwing the paper planes to see whose flew the furthest. 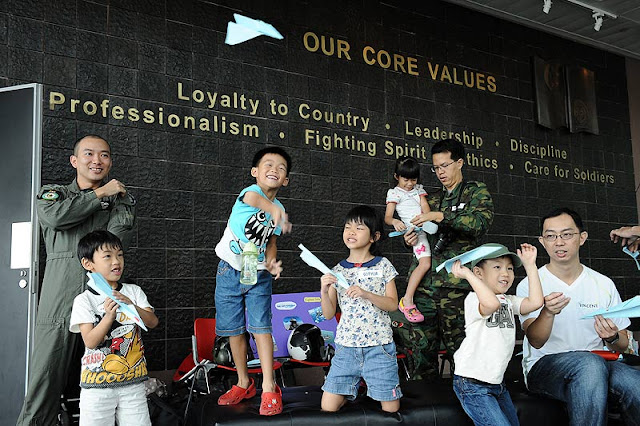 He then explained the roles the Air Force plays, the various helmets they used, etc. He kept the kids attention very well. Even when some kids playfully poked their paper planes on his head or try to “velcro” the badges onto his head, he didn’t mind at all. 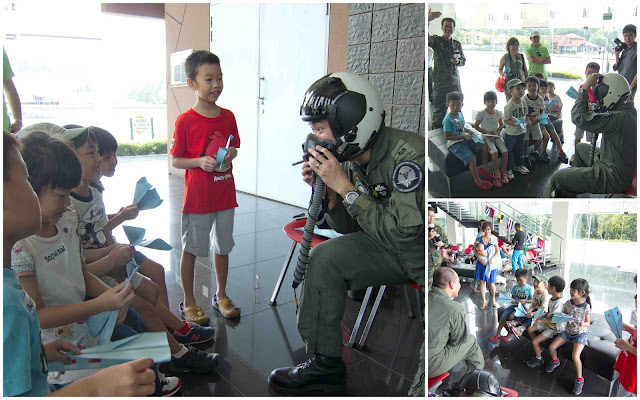 When he asked who wanted to try on their uniform, Xavier gamely raised his hand. 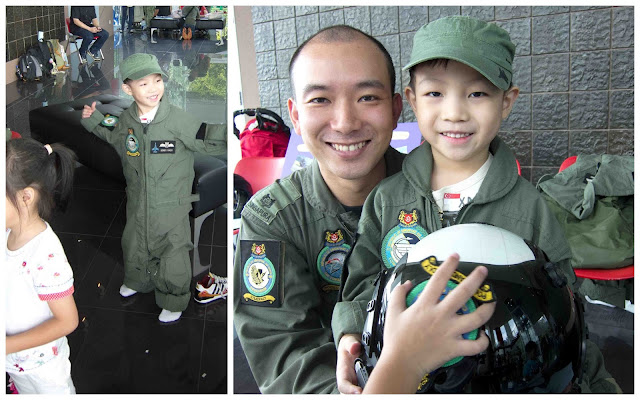 Next station, the Army. The kids were told to pick one of the kids sized uniform and put it on. Was a strange feeling folding Smart 4 for Xavier. 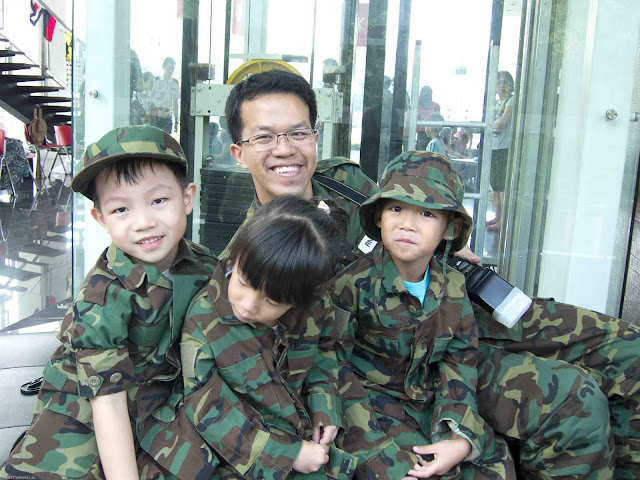 They were given insight of the various tanks we have, hands-on carrying the full pack and what usually goes into the full pack, how combat ration looks like, etc. 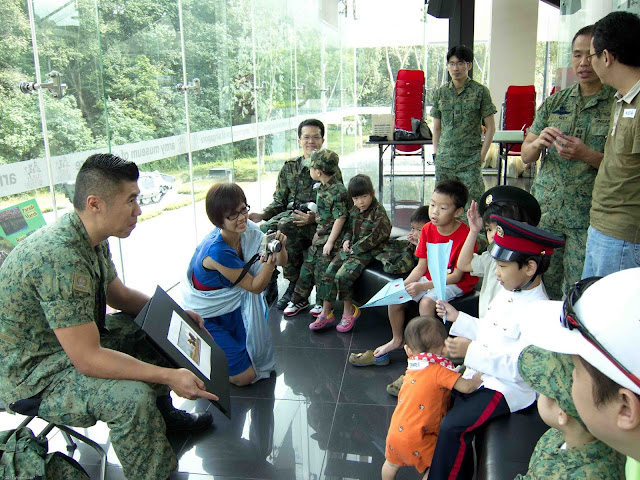 Then it was time for them to build their own leopard tank. Xavier got help from “Uncle Johnson”. 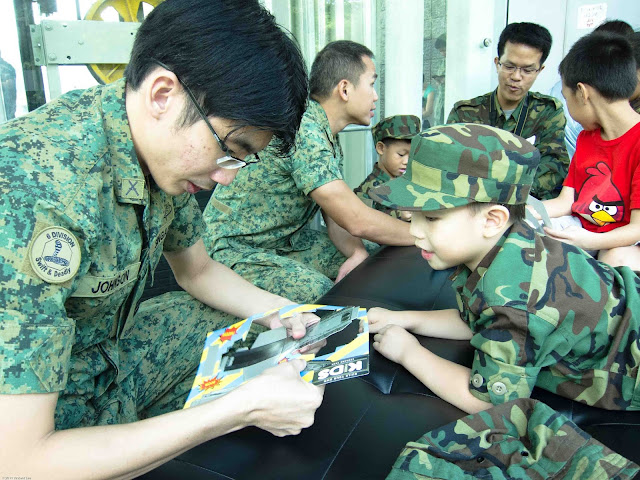 Last stop, Navy. Xavier was having so much fun he just couldn’t keep a straight face for photos. The navy officers explained the various navy personal roles to the kids. They also instructed the colour flags, each which represents an alphabet. Letter “M” seems to be the favourite as it means MacDonalds. 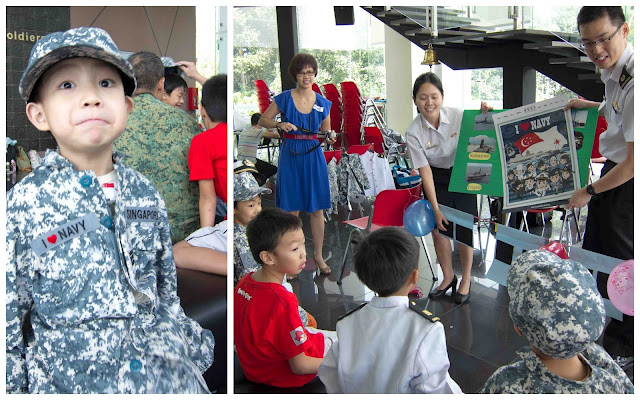 The kids then roleplayed the various Navy roles and work as a unit to spot and destroy the “pirate”. Xavier took up the role of the looker to spot the pirate and inform his captain. Instead he kept directing the gunner instead. They then get to build their own submarine, complete with a Singapore flag. 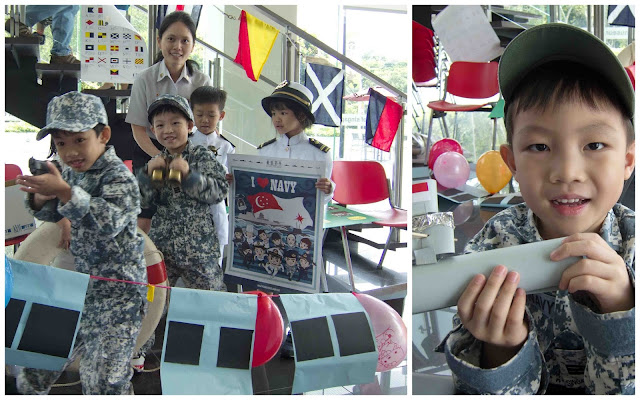 Final task for the day is to put all their handicrafts together into a little project, “What Will You Defend?” 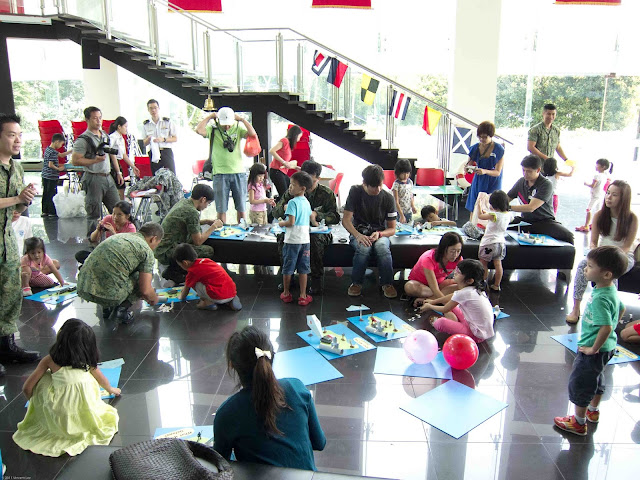 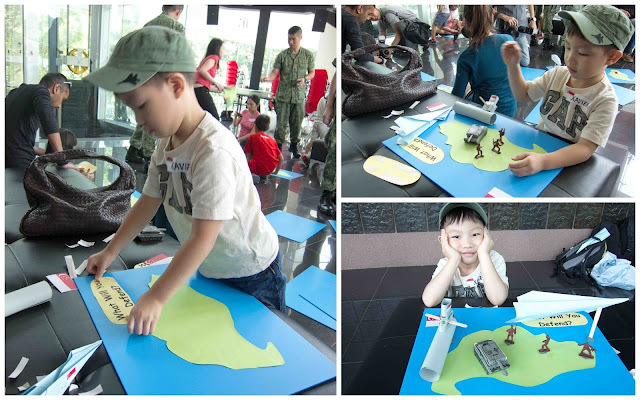 Xavier had fun piecing his project together. He decided where he wanted to place the tank & the troops, the submarine and the plane. I only helped him to “cement” the position with plasticine.

Lunch was next and the kids get to choose one of these lovely cupcakes as dessert. Xavier chose the 3-strips (chevrons, as COL Seet pointed out) which is the 3rd Sergeant rank. My rank in NS. 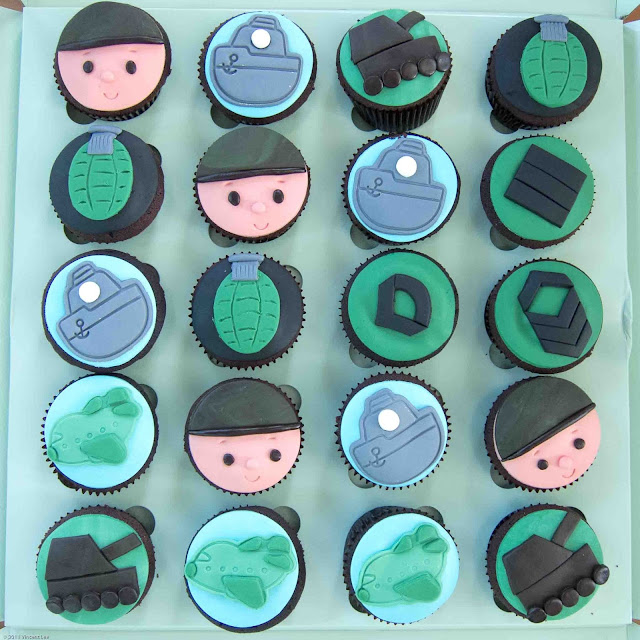 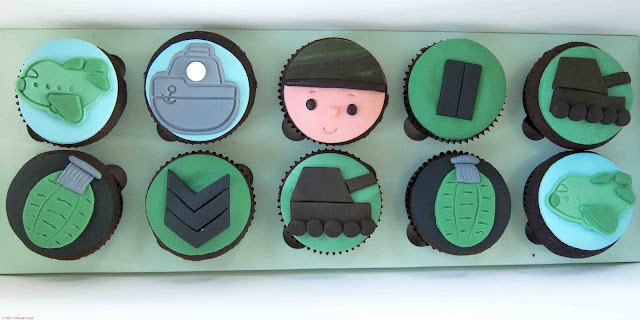 After lunch, the kids were free to explore the other areas and activities on their own. We checked out the mini SCO meant for kids. 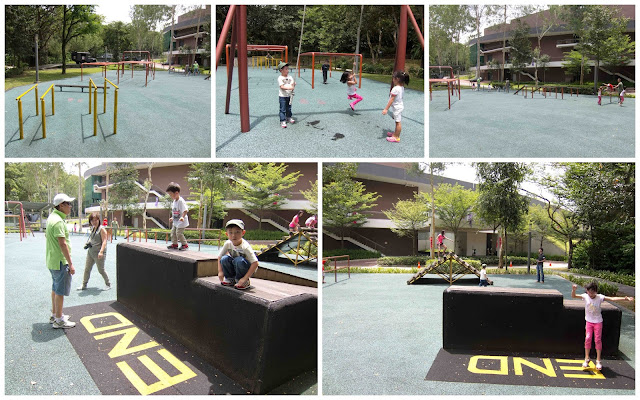 Its a mini version of the Standard Obstacle Course (SOC) we are to go through during our national service (NS) days, all 12 obstacles scaled down. I didn’t manage to take photos of all as Xavier was running about in excitement. I guess to the kids, its just a fun playground. 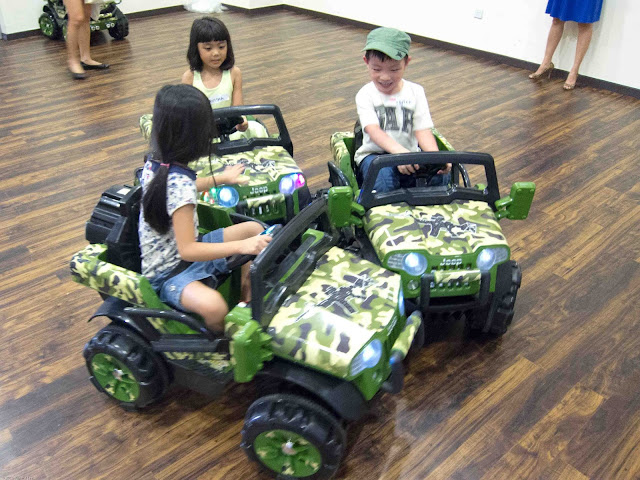 Overall, its been a very fun and informative day for both Xavier and myself. The program was well-organised and tailored towards educating kids about what SAF does and the roles they play, through games and fun activities.

If you are keen in the workshop above or like to have more information, please kindly contact Stephanie Chia, Senior Manager (NS Policy) at her email address: stephanie_chia@mindef.gov.sg.