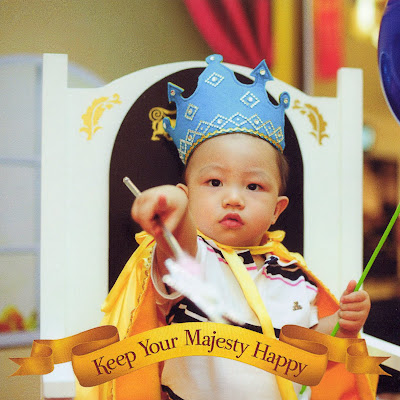 Drypers Singapore is having an event at Vivocity to promote their new improved DryPantz. Basically your kid completes tasks at four game stations and he or she would be able to have their photo taken and enter a draw to win prizes. So the staff would dress up your kid as either King or Queen for the photo shoot. Above is King Xavier’s photo. 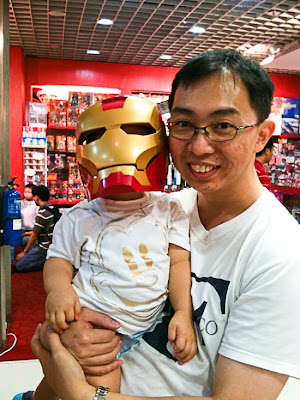 You might have seen one of these Iron Man mask at the toy departmental stores. We put one on Xavier and took a shot, just for the fun of it.
The teachers infant care center have told us that Xavier is very fast at picking up things that they taught. They also say he likes to play the shape sorter. We were quite surprise as just last month, he was still “playing cheat” by opening the lid and putting the shapes in, instead of using the shape sorter. Now he seems to have fun playing with the shape sorter himself, putting the shapes in one by one then pouring all out and start again.
Since yesterday was a holiday, we had a lazy morning at the Ang Mo Kio MacDonald and after that, bought him to the playground nearby to play. He seems to enjoy the Swing, even though he was getting sleepy.