My maiden attempt at blogging on food. Want to have something on record online so its easier for me to find in future.

Use to frequent the Wu Xiang stall at Jackson Centre until Jackson Centre was closed. Didn’t know where they moved to till recently saw them being featured in Mediacorp’s Where the Queue Starts 3. So to satisfy Lilian craving for good Wu Xiang, we decided to head down for an early dinner to avoid the crowd.
Located at a coffeeshop just adjacent from the closed Jackson Centre. Incidently, the coffeeshop and the stall both bear the same name, Lau Zhong Zhong (didn’t notice the name of the stall when it was at Jackson Centre, just know it was good). 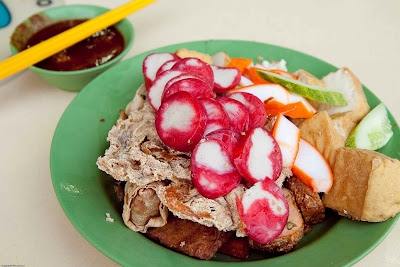 I love the chilli, I always ask for double chilli bowl. The wu xiang skin is very crispy and the abundent water chestnut within the filling give it a very crunchy feel. The other ingredients are also not too oily so you dun get the oily, bloated feeling after eating one too many.

At the same coffeeshop there is a noodle stall call Jackson Noodles Macpherson with many of those TV food show awards. As the Wu Xiang didn;t have bee hoon, Lilian was afraid we might not be full, so she ordered a Bah Chor Mee from the stall. 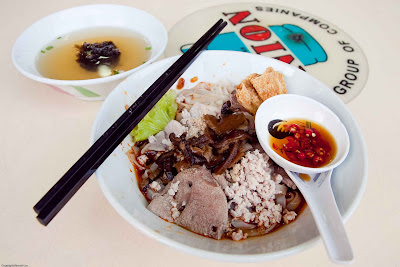 Verdict? “Taste pretty good and has heaps of ingredient.” coming from Lilian. I’m just not a noodle person.