I think I’m bitten by the Lego bug. Its my birthday recently and I bought myself Lego Minifigures, 80 of them to be exact. 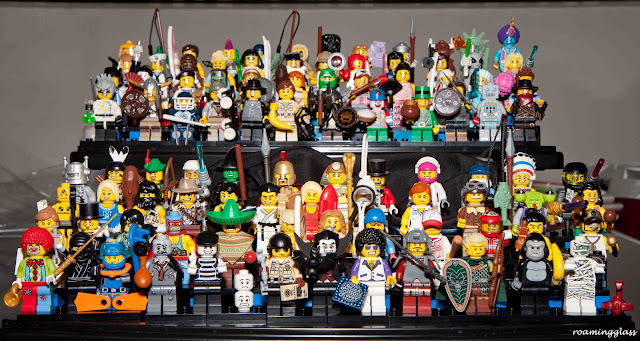 Lego started selling a series of collectible figures in sets of 16 in 2010. The figures could be from all walks of life, from something as likable as a clown to something as crazy as a mad scientist or as far-fetched as an alien. To date, they have released six series and you can see all 96 figures in the photo above.

I remember playing with Lego when I was young and there was this particular set of Lego that I fondly remembered. It was year 1985 and I was primary two. I was top 3 (I think) student in my class and had earned a class promotion. I pester my mum to buy this particularly huge Lego set which we saw at Isetan Parkway Parade, the King’s Castle #6080.

If I remember correctly, it costed about $89.90, lots of money at that time. Mum was hesitate and was trying to get me to settle for something lesser. But she eventually gave in. It was a great set, with horses, spearmen, archers and knights. And the cool feature was the castle could be extended by opening the rear walls of the castle and sliding it to the front. And it had a working drawbridge too.

How I wished I still have that set. Lego have since release a “remake” version in 2010, also called King’s Castle #7946. Though I not really into castles and knights anymore, I’m sure I will be getting more Lego sets.