One of the major concern about sending your child to infantcare or childcare centers is that they will fall sick. In fact, I once read an article about Japanese childcare center where one of the reasons Japanese parents send their kids to school is to fall sick (and build up their immunity).

Lucas started his infantcare on 14th November and we were fully prepared for Lucas to fall sick, or so we think. Lucas did fall sick soon after and is still sick. I’m not saying he got it from the center though there were a number of babies on medication at that time. I mean he could have caught it anywhere and from anyone.

Being mentally prepared still doesn’t ease the heartache when you see the little boy coughing his lungs out like he was doing crunches on the bed. And how he couldn’t sleep at night as his whole nose was blocked and breathing through his mouth irritates his throat further. Oh and that yo-yo fever that would not go away for 3 days. It’s things like these that makes us wonder if we should not have sent him to infantcare at such young age (as if we had a choice).

I was actually thinking how to take a photo of how sick he was when, as if he knew what I was asking, he gave a squeeze and I got my shot. 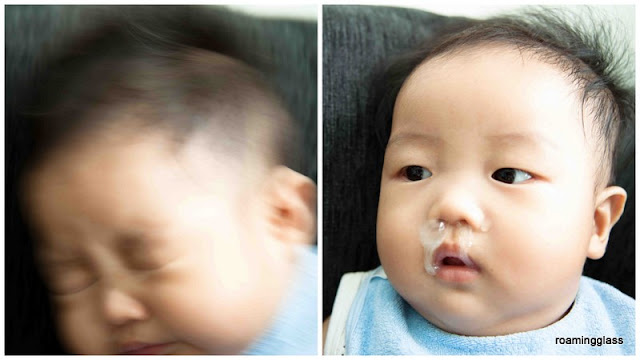 His pediatrician Dr. Tan says its probably a viral infection, since his mucas is clear. What this also means is that he would not need antibiotic as that is only effective for bacteria infection. Hope he gets well really soon. The cranky baby just got crankier…