Skip to content
I started collecting die-cast car models some years ago. It all started with Peiling gave me an Autoart Die-cast car model as a birthday present. It was the Subaru WRC model.

Though I’m not a fan of Rex (preferring EVOs and GTRs), I can’t help but admire the detailing on this model. The metallic blue paintwork, the almost real texture of the materials used on the seat and the carpet, it was a really well made model.

Then on, I’ve been a fan of Autoart. In fact, other than the Merz SLR McLaren, all the 1:18 die-cast models I have are from Autoart. I had stopped the hobby for sometime already partly because the price of the models have been rising and partly I had no space to keep them and I could not display them the way I wanted. They were kept in boxes for fear of dust.

But that has all changed today (2.5 years after I moved in to my present place). I recently found a vendor who is able to customise Acrylic displays to any dimension. Gave them the measurement and 1 week later my Acrylics are ready. Finally I am able to display my models with fear of them losing their shine to dust. 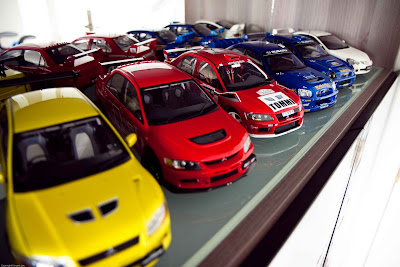 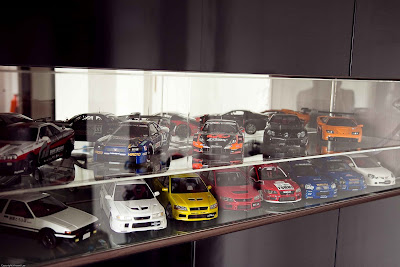 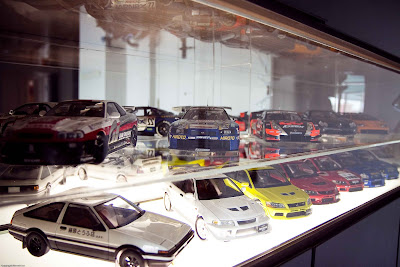 I love the Initial D series and even bought a toy model 2 years ago as Autoart did not make them. So when I chance upon the news that Autoart will be releasing a Japan exclusive only AutoArt AE86 Initial D ver., I knew I had to get my hands on it. Drop an email to Jacky from Motorsports Model Collectibles and he was able to get me a piece. Now I’m just keeping my fingers cross that they would release a ver. 2 of the AE86. They did make a tuned version of the AE68 but its ain’t Initial D ver. 2 if it doesn’t have the 4A-GE 20 valve twin cam engine under the bonnet.

For those of you who have no idea what AE86 is, its the 豆腐 (tofu) car from the initial D series (driven by Jay Chow in the Initial D movie). Still have no idea? Its the white car on the extreme left on the last photo.