I have never really taken notice of ceiling fans, not until we decided to put one in every room and started researching. The ceiling fan universal is huge. I will introduce some that we like.

Start point for us was we were using standing fans every day when we were in our previous home. Be it watching TV or taking a nap, we try to use fans over air-conditioning as much as possible. So since we are using standing fans so much, might as well install ceiling fans for all rooms. Moreover, ceiling fans actually frees up precious real estates of our home, as pointed our by our friend Alan.

The basic criteria for choosing the right fan would be the size of the room/area where the fan will be installed. There must be enough clearance between the tip of the fan blade and the wall/cabinet/L-box, as well as the clearance between the fan and the ceiling. Different fans have different clearance requirement so do check.

There are two main types of ceiling fan, AC (alternating current) and DC (direct current). In a nutshell, AC fans are more powerful, uses more energy, and are more noisy than DC fans. And they usually cost lesser too.

Reliable AC fans are like those from KDK and Crestar. The simple yet elegant Crestar Icol fan caught our eye. It is available in two two sizes (40″ and 46″), four colours, and optional light and remote control. Combine these with a reasonable price and this fan becomes a popular choice.

Fanco has a similiar fan call I-Con. It is only available in size 48″, has four colours, remote control and optional lights. What is interesting about this model is it come with four blades and you can change the blade configuration to three blades or two blades yourself.

DC fans are where price and design factor starts to go up. Top on my list would be the sexy Big Ass Haiku fans. The highly sought-after finishing is the Bamboo, coming in two colours (Caramel and Cocoa). If you have wood finishing furniture or flooring, this fan will match very well. The sleek design won me over. And just in case you are wondering whether the bamboo finishing will last or break, this following video will probably give you the assurance.

Currently only available in Singapore in 60″, it is more suited for living room and maybe some bigger master bedroom. However, I understand that Big Ass Fans Asia Pacific is in the mist of getting regulatory approval to bring in the 52″ Haiku fans so it should be available later this year.

They are also bringing in a new Haiku model equipped with the SenseMe technology and I couldn’t resist not getting it. SenseMe bascially makes it an “Intelligent” fan with sensors to automatically start the fan when someone comes into the room and switch off when everyone leaves. It can also automatically adjust the fan speed according to how many people are in the room. You are also pair it with Jawbone and it will know when you are sleeping and to slow down the speed. Haiku is also available in Composite finishing with two colours (black and white).

Aeratron AE2/AE3 fans also caught my eye. Initially Lilian didn’t like them but the looks are growing onto her. I like the two blade AE2 variant more. Shaped like a leaf, it actually won a number of awards for it efficiency and strong airflow. Singapore seem to only have the 50″ size available in both black and white. In Australia where it originated, they come in three sizes (43″, 50″ and 60″) and in five colours including two timber colours.

The other popular DC fans are Spin, Amasco Triniti and Efinitti.

Some other things to note. If you are installing the fan on your false ceiling (as oppose to your actual ceiling), you need to make sure there are additional support on the false ceiling for the fan. Malaysia may have the same or similar fans at a much cheaper price but it can be a hassle when your fan breaks down so do weight your options. Lastly, some shops or brands do offer discounts if you are introduced by your Interior Designer (ID) so do check with your ID.

If you are looking for fans for small room/area, the range of DC fans in this area are very limimted. There could be others available but the smallest we found are the Amasco Trinity 42″ and probably the soon to be available Aeratron AE3 43″.

Back to AC fans, the choices are aplenty in this zone. The two models I like are KDK M11SU (aka KDK Baby Fan) and Franco Mini Bee.

KDK M11SU is a 110cm (43″) fan. It comes in silver and white and with remote control, coupled with reliability of KDK fans, it will help to cool small areas. There is a slightly larger model call R48SP at 120cm (about 47″) if you want something slightly bigger.

Franco Mini Bee is a 36″ fan with 15W three colours LED light. The fan comes in 3 colours (white, silver and multi-colour) and remote control. The interesting model is the Multi Colour version, it adds a dash of colours to any setting. The small blades does mean the area that can feel the wind would be limited so do take this into consideration. 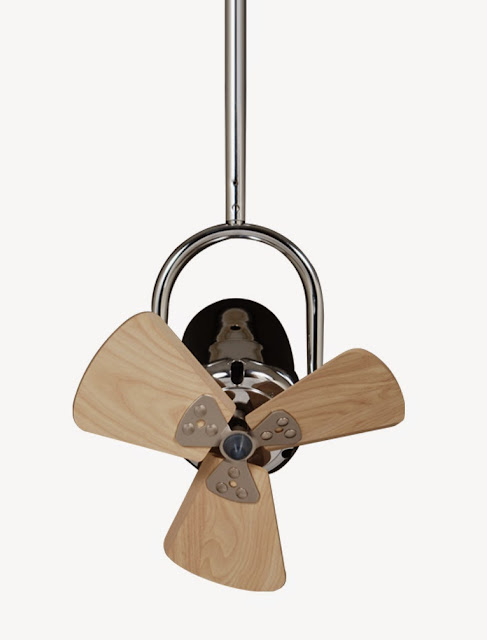 The last fan I want to introduce is the Vento Fino. At 13″ is a really small fan that can be ceiling or wall mounted. As this model does not turn or oscillate, you will have to plan before mount where you want it to face. My friend Alan mount it at a corner of the children’s room, away from the bunk bed and yet still providing wind to the children. I have also seen it being used at the balcony and even kitchen. This comes is an array of colours. There is another model call Fino II. Its slight larger at 16″ and the most important feature is it can oscillate. The price is more than double Fino though.

Just a pointer to end off this extended post, do take it with a pinch of salt when you are testing fans in fan shops. The fan shop often wants to display as many variety of fans as possible. Hence the mounting and the position of the fans might not be ideal like in an actual room application. And you are likely to be standing directly below the fan with the shop turning the fan to max speed. This of course makes every fan windy.

Hence when testing in shop, do test the fan you are keen at various speed settings and also test the wind in various spots away from the fan so you get an idea how large an area the fan will cover. Lastly, if you know someone who has the same fan installed in their house, ask if you can test it. That way you can get an actual feel of how the fan performs in an actual setting.