Our RWS staycation package comes with two adult free passes to Universal Studio Singapore (USS). Two years ago, I said I would not be coming to USS for a very very long time. Time files and I’m back here again.

On the way to USS, we pass by some unique flower decorations in the form of a green and a red snake to usher in the year of the Snake. There is also a huge golden dragon hanging near the bottom of the flight of stairs. 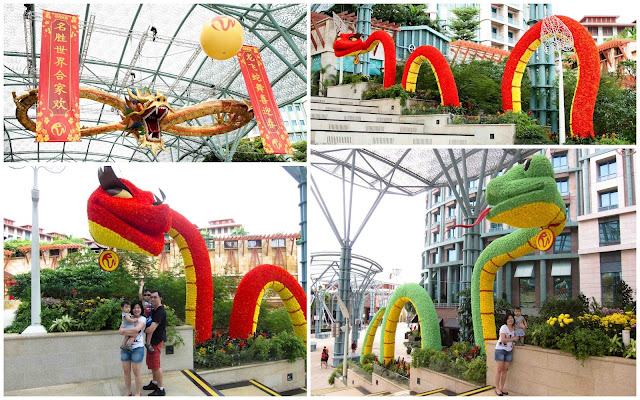 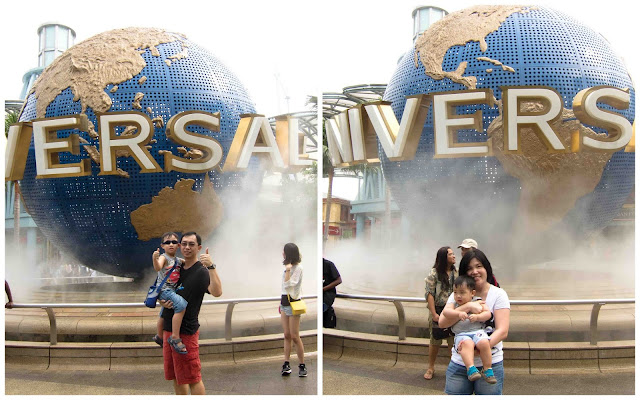 What’s different this time round is that USS added two rides. One is the highly recommended Transformers The Ride and another the opening-soon Sesame Street Spaghetti Space Chase. The latter is a slow ride targeted at young kids. I was initially disappoint that it will only open a few days later. Surprisingly they were having soft launch that day so I went with Xavier to try the ride. 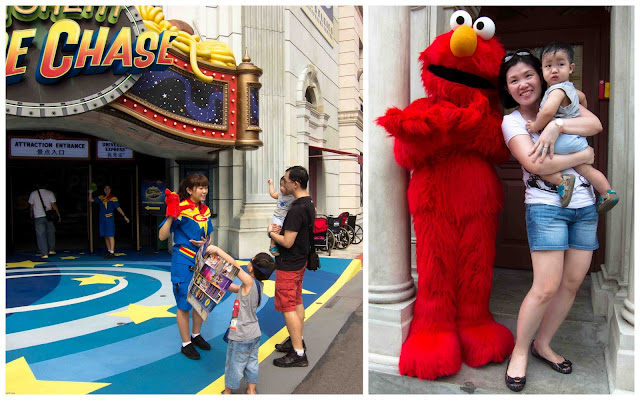 Its a slow dark ride where you join Elmo and Super Grover in a journey to outer space to look for the villain who stole the Spaghetti. Strangely Xavier seems visually unhappy after the ride. When I asked him why, he says he don’t like the sesame street friends. Mummy on the other hand is all smiles with Elmo beside her.

I then went to try out the Transformers the Ride myself. To me, this is THE best ride of USS. Its a 3D ride with hydraulic vehicles name EVAC to simulate the various movement and speed. Would have gone for more of it if not for the long queue time. 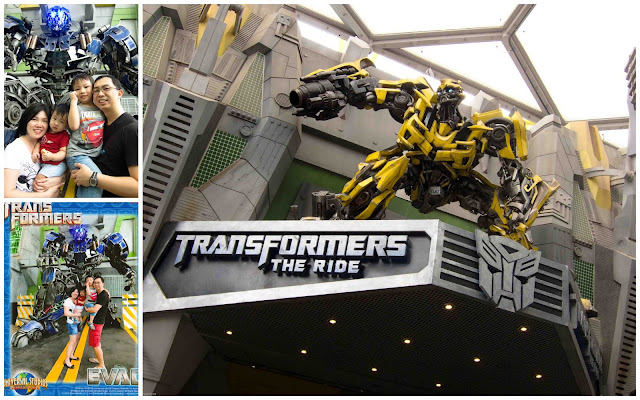 Right beside this attraction, we found a little machine that seems fun to play. It has large lever where you can turn to “Press A Penny”. What it does is for $2, it will press a penny with design of your choice as you turn the lever. We did some when we were overseas in Disneyland but those where just a button press and the machines will automatically press one for you. These ones where you turn the lever manually to press the penny seems more fun. Xavier and even Lucas are fighting with us to turn the lever. 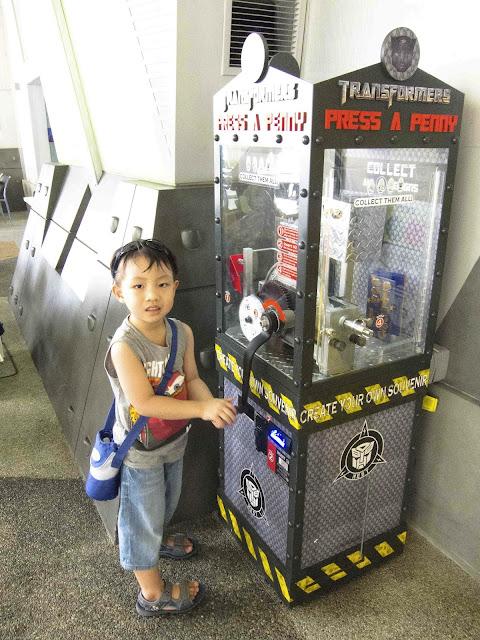 Here are our Press A Penny collection. The 2 rows of pennies on the left are from USS and those 2 rows on the right are from overseas. I love the newly pressed Elmo and Cookie Monster pennies. Although you can’t see it clearly in the photo, the detailing on the fur looks very good on the pennies. 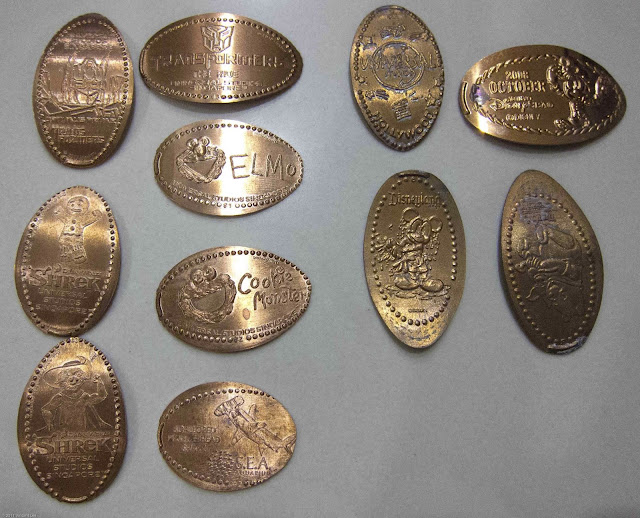 The next area is Xavier’s favourite, Madagascar. It has the King Julien’s Beach Party-Go-Round that both boys can’t get enough of. It also has a slow dark ride call Madagascar: A Crate Adventure that you sit on a boat. Somehow Xavier loves this ride and request to go for it again.Well guess he likes Madagascar more than Sesame Street. 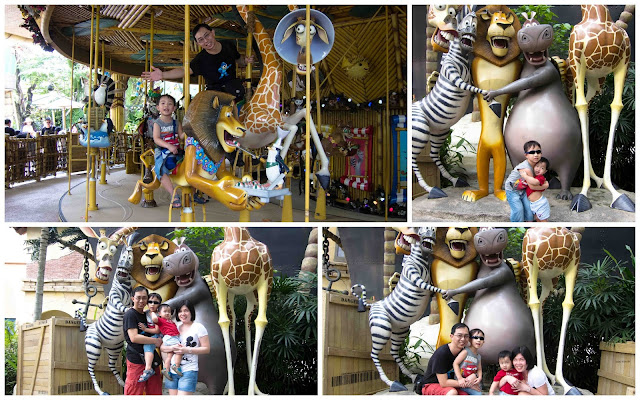 How can holiday be complete without shopping? Both Lilian and I went mad in the Sesame Street shop. The merchandise are so cute even Lucas was taking down all the cookie tins and lining them on the floor. I bought also almost all the sesame street character fridge magnets. So irresistible Xavier took the group photo for us, well done boy. 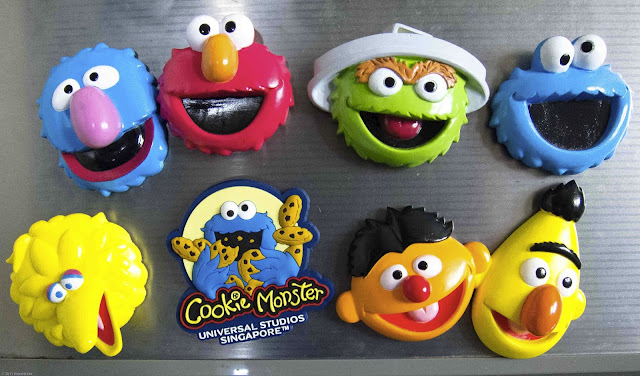 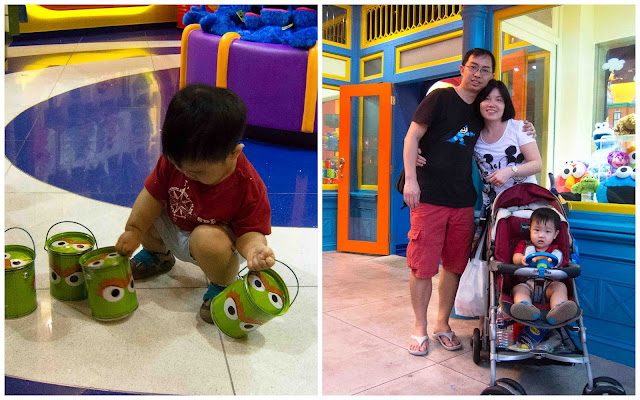 Sadly Xavier is still scare of mascots so he didn’t have any photos taken with mascots. Lilian and I both spare no chance getting close to the mascots. We love Kungffffuuuuuu… 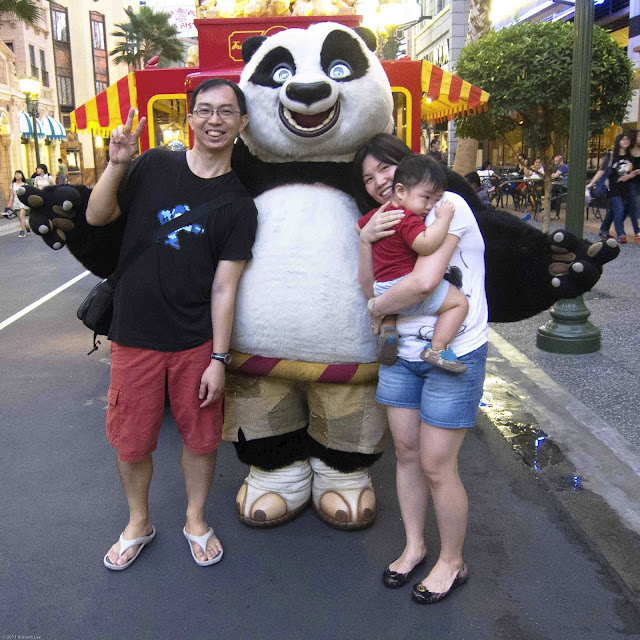 Well at least they are okay as long as the object do not move, like this giant Hershey’s Chocolate syrup bottle. Overall it was a pretty fun staycation. Although day 1 we felt like pulling our hair out and Xavier fell off the bed and hit his head on the first night sort of dampen my mood a little. But we are definitely not ready to bring the boys out on a holiday, not if we wanna enjoy it ourselves.