We are expecting a new addition to our family at the end July so we thought of going for a vacation since it will be another 2 years plus before we can (practically) travel again.

Initially we had Hong Kong Disneyland in mind but the logistics involved for an overseas trip with a 2 year old toddler and a pregnant wife sort of put me off. So we settled on the next best thing which is a staycation at RWS (Resort World Sentosa). It will be a vacation without the trouble of travelling overseas.

I booked the 3D2N Ultimate Fun package which cost SGD788 net. The package includes the following:

Accommodation, breakfast and USS ticket are all free for Xavier since is is under 4 years old so it seems like a pretty decent deal. We chose Festival Hotel as it was more “family friendly” with what seems like a bigger room on picture with additional loft bed and a long sofa bed. 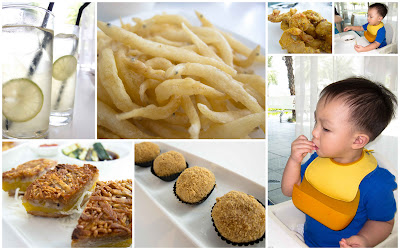 We start the staycation with dim sum lunch at Tung Lok Signature, Vivocity. The dim sum is pretty good and the above photo shows some of the dishes we had; Aloe Vera Honey drink, Fried Silver Fish, Salted Egg Prawn, Glutinous Balls with Black Sesame Filing Coated with Peanut and Fried Taro Strips with Pumpkin.

Fried Taro Strips with Pumpkin is interesting as the taro strip crust was very crispy but the taro and pumpkin filling in the middle was soft and fluffy. The Glutinous Balls were also lovely, very soft but packed with a punch when the black sesame filling burst in your mouth when you bite it. I find the prawns so-so (find the salted egg taste bland) but Lilian loves them. Xavier of course love the silver fish thinking they were fries.

Xavier was so excited about celebrating Lilian’s birthday. He talks about which cake mummy likes and about blowing candles. 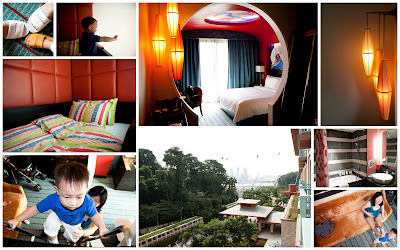 We checked into the hotel and true to the picture the room was larger and the ceiling was higher than most hotel rooms we have been to. The loft bed wasn’t suitable for Xavier but if you have older kids, I’m sure they would love it. The main bed is a queen size so it was quite a squeeze with three of us sleeping on it at night. And like most hotel beds, it was too soft for me and I woke up with an aching body.

The toilet is pretty big and we absolutely love the “Raindance Air” shower head by Hansgrohe. Even Xavier had fun showering with the rain-like droplets. (He wanted the same when we reach home and I tried to imitate by inverting my shower head so the water falls like rain but he looked at me and asked, “No more rain?”).

The view from our room was nothing to shout about. But being family friendly, they do have kids size comfort items like bedroom slipper and bathrobe. 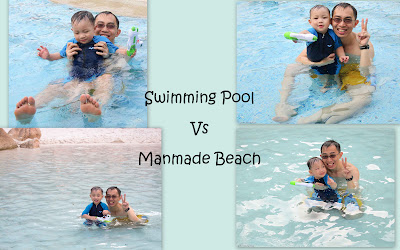 The beauty of RWS is you can use the facilities in any of the hotels (I think). We heard so much about the man-made beach at Hard Rock Hotel that we brought Xavier there instead of our hotel’s pool.

The sand is clean and the water ain’t salty, it’s a good way to introduce beach and sand to kids. Xavier also had heaps of fun at the waterplay area.

Sometimes being silly is fun when you are with your kids. We had fun at the waterplay area of Hard Rock Hotel. Unfortunately the water slide was under repair. Xavier seems to be extreme friendly to girls when we are on holiday. You will see two-thirds into the above video where he tried to make friends with a French “jie jie” (older girl) by offering his watergun.

And then literally chase after another “jie jie” from Hong Kong next. 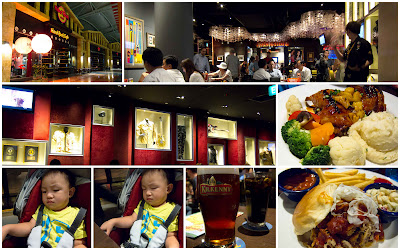 We had dinner at the Hard Rock Cafe. Xavier totally knocked out after the swim. I ordered the Hickory Smoked Pulled-Pork Sandwich and Lilian had the Grilled Hawaiian Chicken. Had a Kilkenny since I wouldn’t be driving.

Xavier woke up in time for dinner and he became the fries machine, finishing each of my fries in 30secs while dipping into my BBQ baked bean sauce in between bites. 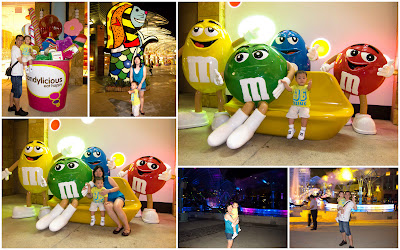 We took a walk around the waterfront area after dinner. There was a fountain show at 9pm but we missed it.

We ended the day by celebrating Lilian’s birthday in the hotel room with a mini cake from awfully chocolate. Xavier was so eager to blow and cut the cake.