Today is USS (Universal Studios Singapore) day and I have bought tickets for my parents to join us. No rain clouds in sight so we are not likely to be wet, or so I thought. 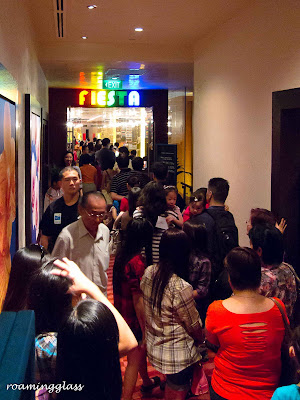 In case you are wondering what the above photo is about, well I gonna give you a very important tip of staying in Festive Hotel: Go for your breakfast EARLY. We went at about 8:30am in the morning and there was a small queue of 10 mins. But when we were finished and leaving the restaurant, the queue was all the way to the lift lobby. Madness. And to add salt to wound, I overheard one of the manager tell the very agitated guests in the queue that the restaurant was closed for breakfast and they are trying to accommodate all in queue.

We thought it might be an influx of guests that particular day but when we came the next day for breakfast (at 8am just to be safe), the long queue again stretch to the life lobby when we were leaving. So you have been warned.

The breakfast buffet spread was not too bad but it was the same spread for both days (kind of miss Club Med’s daily changing menu). What got a little on my nerve was that they were playing upbeat Salsa/Merangue music. For the record, I love Salsa music. But two straight days of Salsa music at breakfast felt as if they were rushing me to quickly eat and finish my breakfast so that they could clear the queue outside the restaurant. 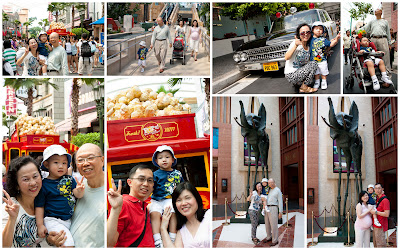 After my parent arrived, we set off to USS. The huge Universal globe was under maintenance and many people had to content with taking photos with a picture of the globe instead.  I rather not take. Ha. 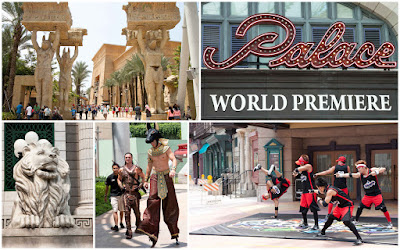 We took the anti-clockwise route, going from “Hollywood” pass “New York” to “Sci-Fi City”. There were many sights to see, performances to watch and mascots to take photos with but Xavier wants none of that. It was nearing his nap time and he was getting cranky. And he seems to be scare of mascots, any mascots. We wanted to take photos with the Madagascar crew but he was screaming and crying as if we were offering him to the Alex the Lion as lunch. So we let him take his nap in his stroller while Dad and I went for the Battle Galactica roller coaster. 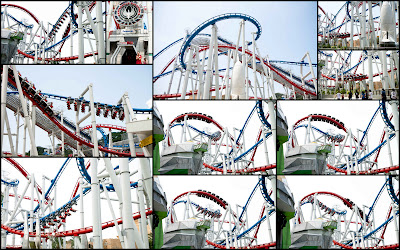 There are two rides you can choose from. The Human ride is a seated coaster where you get drops, twists and turns whereas the Cylon ride is a suspended coaster including cockscrews and cobra rolls. Both rides starts out at the same time and there will be some moments where they looked like they would criss cross each other. Dad was only game for the Human ride and being the “safer” ride, the wait time was longer. After it was done, dad joined the rest while I went for the Cylon ride alone, twice (as there wasn’t much of a queue for it yet). By the time I was done, I was drench in my own perspiration (not sure from the adrenaline rush or the freaking hot weather).

When Xavier woke up from his nap shortly after, he too was drenched in perspiration (so its the freaking hot weather) that we had to change his tee. We decided to look for an air-conditioned place to have lunch. Skipping pass “Ancient Egypt”, we wandered into “The Lost World” and settled for local fares at Discovery Food Court. Tip: You can use the $25 gift voucher from the package to cover the lunch cost. 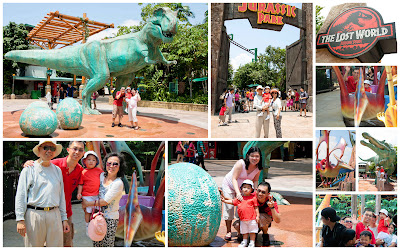 After lunch we backtrack to “Ancient Egypt” to ride the Treasure Hunters. Its a slow and controlled jeep ride young kids would love. Tip: If the queue time is too long, I suggest to skip this. We then went back to “The Lost World” for the Dino-Soarin ride. Xavier loves this ride as you can press the white button to make it “fly” higher. If not for the 30 mins queue time we would have gone again.

I wasn’t in the mood to try other rides mainly due to the weather. Queuing for rides in this heat and humidity is a party spoiler. So we went for something air-conditioned next, Shrek 4-D Adventure in “Far Far Away”. Lilian and I been to the same show at Universal Studios Hollywood so I kinda know what to expect but my parents had heaps of fun and surprises. Xavier however was so scared of the 3-D spiders 5 minutes into the show that he cling onto me for the rest of the show and refuse to watch it. I would be scared too if I was his age. Imagine spiders right in front of your eyes and getting closer (due to the 3-D effect). Tip: There are stationary seats in the middle of the theatre and you should use these if your kid is too young. 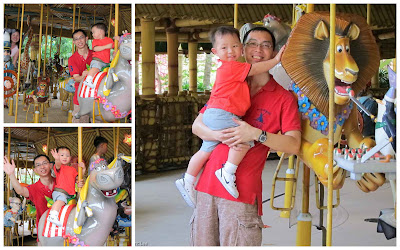 Last stop for us was King Julien’s Party-Go-Round at “Madagascar”. Xavier chose Alex the Lion the first time round then Gloria the Hippo the second time round. And finally a ride Lilian can join in.

We head back to the hotel to rest before heading to Vivocity for dinner.

My overall impression of USS is that it’s pretty small and the heat and humidity of Singapore didn’t help make it fun at all. If you are bringing a young kid like Xavier’s age (2 years plus) and a pregnant wife, you might not enjoy it very much as there are many rides which pregnant ladies can’t participate and there are only a few rides for young kids (but then again Xavier’s entry is free as he is below 4 yours old). I personally would not be returning to USS for a long, long time.

Here’s the link to Day 1.
Want to see what happens in Day 3?
View more photos at my Flickr.