Met up with my NPCB friends yesterday at Werner’s Oven yesterday for Debra’s gathering (before her wedding next week). Found the food strongly flavoured (read salty) to my liking so not gonna talk about food.

Instead, gonna touch on abit on shooting indoors at night. Now I’m no expert myself so if you would like to share and contribute your ideas and knowledge, feel free to do so in the comments box. Yesterday’s set up is similar to shooting during wedding dinners as well. 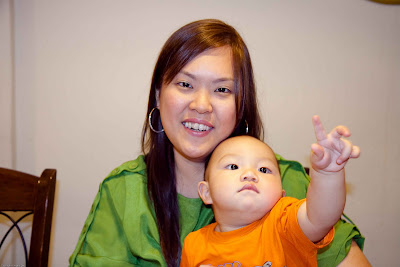 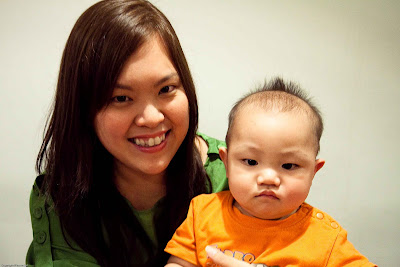 Above are two photos of Xavier with our beautiful bride to be. The first photo is shot with the on camera flash (the pop up flash on your DSLR or the flash on the point and shoot cameras) and the second is shot with flash.
Which photo would you prefer to keep? It definitely the second photo for me as it looks more natural. The on camera flash has made the first photo too harsh and flat. Which is why I always try to shoot without flash.
So point 1, try to shoot without flash. How do you do that? If you are shooting from a compact with no manual controls, sorry there is nothing much you can do unless you have one of those powerful compacts (like the Canon S90 which has a F2.0 aperture and better ISO noise control). If you have one of those cameras with manual control, try to use higher ISOs (800 and above, depending on your tolerance for ISO noise), open up your aperture to the max (the smallest F-stop number your lens can open up to), and a reasonable shutter speed (the slowest shutter speed your hands can hold steady and still capture the subject).
Most DSLRs can control the ISO noise pretty well so should be a problem. For me, its better to get a slightly grainy shot without on camera flash then a clear shot with with on camera flash. As for fast lens, you do not have to break your piggy bank to get one (although fast lenses are generally more expensive than their slower peers). You could get a fast prime lens (like the Canon 5000 F1.8) and still enjoy low light photography. As for shutter speed, I try to get at least a speed of 1/25secs with shooting people indoor. Anything lesser than that its a hit or miss for me (a fair number of shots would be blur, blame it on my shaky hands).
With the above, you should be able to get pretty cool indoor night shots. But this setting cannot handle all situation, especially group shots, because the large aperture has a shallow depth of field which will cause some people in the group shots to be blurry.
Point 2) Group shots. This is why you always see wedding photographers using those big flash heads. These flash are needed to provide enough flash power to reach and lit everyone. But the idea is to compliment the surrounding lightand not to overpower it (like my shot above). This is what they call a fill-in flash. Anyway its a big topic by itself so if you wish to learn more about it, check out Stobist. I am still very green to strobes and still learning…

2 thoughts on “To Flash or not to Flash?”