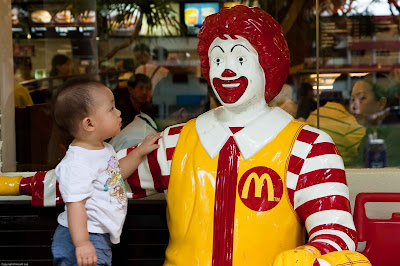 “Hi Uncle, how come your nose so red? How come your face so white? Can I be a Mackid? Can I get free happy meals?” 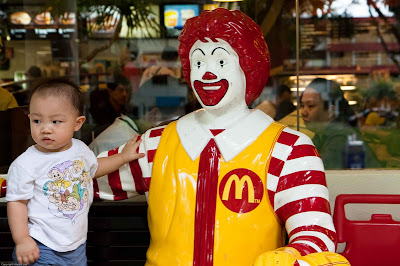 “What do you mean by he can’t talk?”
We have been told many times by both people we know and strangers that Xavier is so adorable, cute, fun, smart… (and the list goes on). So we had always wanted him to join some baby contest and maybe win some prize.

Well we finally entered him into this “Healthy Breastfed Baby Contest 2010” organised by KK Junior Club. The preliminary judging round was yesterday but Murphy’s Law was in play. As I driving out of the carpark toward KPE, an unfamiliar sound was coming from the back of the car, left side. Then a feeling of déjà vu stuck me as it seem to have happen before, only it was right side the last time. As I stop my car by the roadside, my fear had turned reality. My left back tyre is flat.

I made my way slowly to the petrol station near my place as I plan to inflate the flat tyre before I head to AMK Autopoint to mend the flat tyre (like the last time). But having paid $30 to enter the contest, I still wanted Xavier to join. So we tried our luck to get a cab for Lilian and Xavier to head to KK. But after 10 minutes under the hot sun, we decided to give up. As we head back to the petrol station, luck was our side as Lilian and Xavier got into a cab that was leaving the station after filling up.

Too bad the contest did not go well as Xavier was in a grumpy mood having just woke up from his sleep in the cab. He refuse to do anything Lilian asked him to do and gave all the judges the cold hard stare. Looks like we will not be in the Finals. What’s frustrating was be was back to his playful self 10 minutes later when I picked them up. Oh well…
Anyway Xavier is gonna be a pretty mischievous boy. I took a video of him messing with Lilian’s laptop this morning. See what happens near the end of the clip and you will know what I mean.