Having the knowledge and actually applying what you know are two different things. I have taken many photos of Xavier since his birth, easily 3000+. But somehow I find my photos lack that something. So I decided to look for a “how to take better photos of babies/kids” kind of course/workshop during my block leave.

There ain’t many such courses around but I chance upon a workshop by Tomato Photo (Eric and Elsie had their photos with Zach taken by him and Joanne was telling me about wanting to take her babies photo with him). So I decided to use the money I had intended for a tripod to pay for the workshop instead.

Today was a 2 hour session on the “theory”. But it was like having a casual chat for us. In fact, it feel abit like I was “interviewing” him. So what have I learnt from the session?

– Having the knowledge and actually applying what you know are two different things
I know what rules of composition are; rule of thirds, leaning lines, colours, textures, shapes, etc. I have gone through them in my basic photography course and the books I read. But when it comes to actually taking the photo, I do not seem to apply them. Often, I am so focus on capturing Xavier and his action that I just snap photos. Hence my photos look more like snap shots.

Even when Hart showed me some of the photos he took, I know it looks great but I can’t really tell why until he explained what he “saw” when he took the photo. I guess its that comes with experience and practise.

– Know the technical stuff then forget about it
Very often we get sucked into the technical part of photography, like “is my lens not sharp enough” or “full frame more expensive and better”, etc. I know I do. But these do not guarantee you great photos. Taking great photos is about capturing the moment you would treasure and like to keep as memories. Equipment is just a tool to achieve that. In fact, Hart showed me how he prefers softer photos for babies (since they are soft by nature) and how adding noise to a photo can make a photo look more real (see the photo example later).

– There is a photo within a photo
Well Hart didn’t actually say it this way but he showed me how he would post process the two photos I brought along to the session. See the differences below. 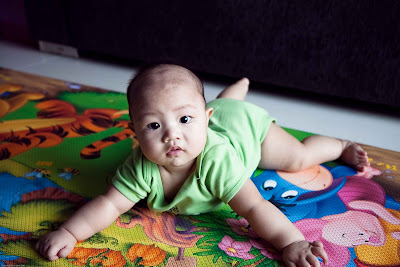 This was the original shot I brought. It looked kind of messy with the bright colours from his playmat distracting the viewer from Xavier. Hart showed me how he would lower the colour intensity of the playmat so that the subject would stand out. 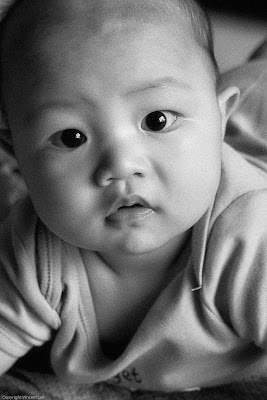 Or he would crop away the distraction like the above photo. By doing so, the viewers would immediately focus on Xavier’s eyes first. He even changed it to black and white and added noise to the photo. I thought it looks great. Bryan Peterson had mention before in his books that there is often a photo within a photo and you can see the above as a perfect example. 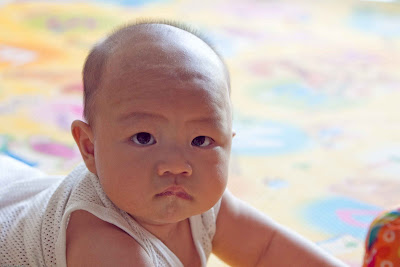 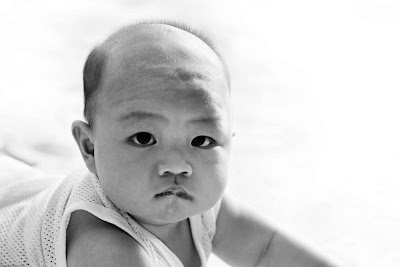 The above is another photo I brought. As Xavier was back-lit, Hart simply blew out the background and changed to black and white so the photo looks more simple.

Hart also shared some of the way he engage his subjects to get certain look or expression. The Golden Rule, subjects will always look their most natural when they are at ease and not posing.

I am looking forward to the practical session with Xavier next week.

2 thoughts on “Workshop with Tomato Photo”