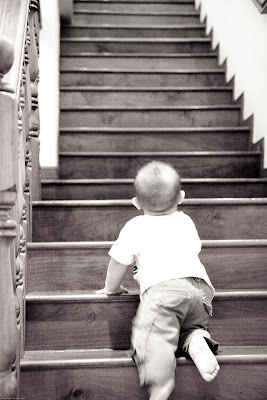 “The Road is Long…”
Xavier’s progressing very well. He was stumbling around trying to walk on his own just before his birthday and now he is trying to run. This year’s CNY has by far been the most tiring for Lilian and I as we followed behind Xavier’s every step (like bodyguards) to prevent him from destroying other peoples’ houses we are visiting.
We were at my uncle’s place for the usual CNY dinner and he found something new to explore, The Stairs. He was having fun climbing each step slowly on his own. I wanted to capture a shot of him going up and many of the shots were blurred as the lighting was low and I didn’t have my flash with me.
As I reviewed my shots, this shot turn out to be my favorite. In fact, the lyric “The road is long…” from the song “He Ain’t Heavy, His My Brother” began to sing in my head when I saw the shot.
He can call out a few words and “Ball” is his favorite. He use it to refer to almost anything and everything. He is always swaying his body and head when he hears dance music, as if he is ready to dance. He is also more responsive during play time. Here’s a video of him clapping along with the song.
Here’s a video of him parading his birthday balloons at home.
Here’s a video of him getting his haircut for CNY.