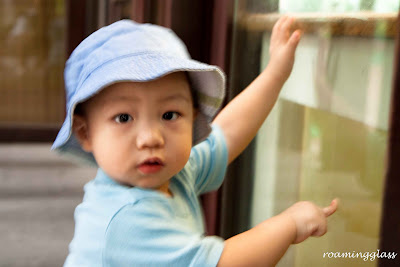 Xavier is 21 months today and he is showing heaps of curiosity for things around him. He is also seeking more attention by calling us (papa or mama 101 times) till we give him attention and then tell you the “fresh” object/subject he saw. And he will keep repeating the object/subject even after you acknowledged him, until something else grab his attention again. 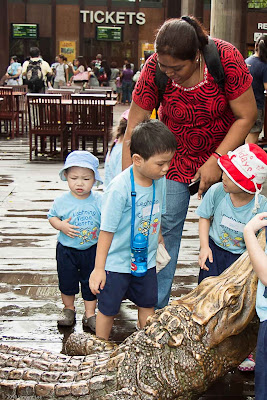 At the same time, he also shows his timid side, telling people he is afraid of the very same “fresh” object by his frown and his gentle patting on his tummy (instead of on his chest) and saying “怕怕”.

He wouldn’t go near mascots, or even fake animal status like the crocodile near the zoo entrance or the cows outside Marché.

He is able to sense our displease or anger when he does something we disapprove. He would bow his head and let out sobbing sound.

I find myself enjoying fatherhood more as I adjust my expectations and control my temper better. I found my previous outbursts of anger usually worsen the situation.

What I do now is I would repeating (or nag) what I want from him (could be behaviour, action, item, etc). Example: he wants me to play “Row your boat” song in the car. So we nag to him that he has to ask nicely, “Daddy please, play Row”. Sometimes he would throw tantrums. We just have to be firm and let him know he will not get what he wants by throwing a fit. We usually say, “Daddy cannot hear what you want when you are crying. Stop crying and tell daddy nicely what you want.” After a few times, he gets the message and it works nicely now.

Of course there are times when it doesn’t work for Xavier, especially when you are refusing him food/snack after he spotted it. Someone told me before that kids usually look for short term gains. They do not have the patience to look long term. So I either try to divert his attention or if that doesn’t work, I would then “bargain” with him.

Lastly, something we found useful is the “bye bye technique”. We taught him to say hello and bye bye to people on the street, at the market, in the lift, etc. Then it was applied to animals like dogs on a stroll or birds in the park.

Then we found this “bye bye” is actually very powerful as it signals to him its time to detach from a certain object/subject and leave.

Example: He loves those coin operated rides now, especially the Barney and Thomas the Train rides. So if we are just passing by and do not intend to let him sit on the rides, we would tell him” Xavier, say bye bye to Barney”. He would happily wave the ride goodbye.

Or if we are in the toy section, it works wonder too. “Say bye bye Xavier, we will come back another time” and he completely detach from the toys and happily leave them.