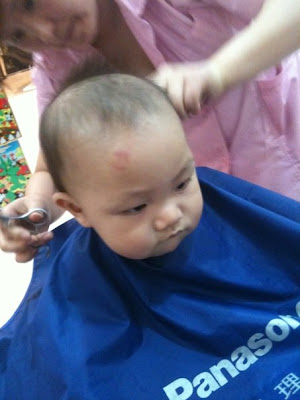 Xavier had his second haircut on Wednesday (25 Nov 09). The first was when he was five months ago when we shaved his head bald. He certainly looks much neater after the haircut.

He would also remember this day for another reason, a bad one. You guys see the red mark on his forehead? He was actually bitten by an older boy in his class. It actually looked pretty bad, as you could probably see from the photo it was red and swollen.

We are not angry with the boy, for we as parents know kids “play rough” at time and as they are still young, they are still learning. Fight, biting, pushing, hitting are all part and parcel of play for kids their age. What we are displease about is the fact that the parents of that boy didn’t even bother to give us a courtesy apology. One of the teachers at the center had told the parents what happen on Friday (about the time when we went to pick up Xavier), as we see her carrying Xavier and showing the “damage”.

What happens next was the parents saw us coming to pick Xavier up, they just left without a word. Thursday morning when we bring Xavier to the center, again we cross path at the entrance and again they treated us as transparent. What ill-manners parents.

I been trying to teach Xavier self-defence and lesson one happens to be “Poke the freaking eyes”. Tell your Master Ong not to come near Xavier for he might not get away the next time round.

On a side note, Lilian and my Mum had ask me not to teach kids such violent thoughts. I think its a guy thing but I strongly believe being about the fend for yourself and to be able to fight back as self defence is important. Its a different story if he starts a fight and bully someone else, that is when I would discipline him. But if he bites back when someone bites him, I would give him a pat and say “Well done boy!”.