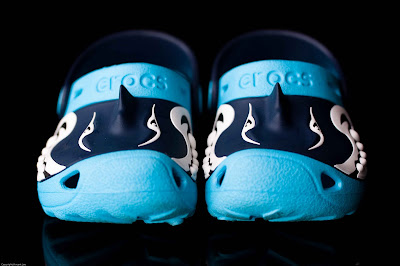 As Xavier is walking more, we wanted to get him something that he can just slip on and walk around. Wasn’t too keen on sandals as its open toe so we got him a baby Crocs instead. 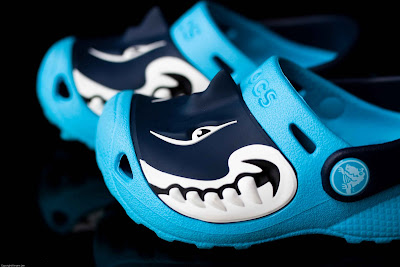 Saw this Crocs in the design of a shark. Looks pretty cool and since he eats like a shark, we decided to get it for him. Talking about eating like a shark, he is so alert to food, or should I say the mention of food around him, like shark is to the smell of blood.
The infant care teacher told us an incident where he was sound asleep one afternoon. One of the teacher was telling another teacher that its time to feed another baby food. Immediately Xavier woke up at the mention of food and walked to the teacher who said it and say beside her, waiting to be fed. And he often gets angry when the teachers dun feed him food that is not meant for him.
Even when feeding him, he is very impatient. Nobody is able to feed him fast enough, not even me. So how fast does he want to be fed? Well, when you put the food into his mouth, the very moment the spoon leave his mouth he makes noise demanding for the next feed. The only way I figured he would not make nosie is if his mouth is at the end of a conveyor belt.